This function has been arranged to tell students the historical facts about history and the struggle of our forefathers for this land where we are living independently without any interference in our social, economic and religious life.

Pakistan Day Celebrations at GC Women University,Sialkot entitled as “Day of Commitment”.  Pakistan Day, 23rd March is celebrated with great zeal and zest across the Pakistan. Department of Political Science GCWU SKT has arranged celebrations of Pakistan day for students and faculty of University, to ensure them the political struggle of Muslims of sub-continent. To tell them the historical facts about history and the struggle of our forefathers for this land where we are living independently without any interference in our social, economic and religious life. 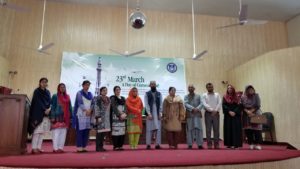 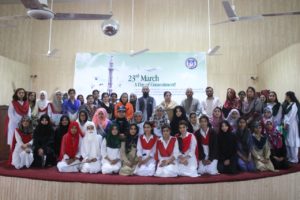 The function has consist of two competitions, 1. The Quiz Competition and 2. The speech competition. Various performances has been presented during function by the students of Department of Political Science and IR.
The Function officially started at 10:00 a.m. sharp with the recitation of Holy Quran, Na’at e Rasool and the national anthem. At first hand Speech competition has been started the topic for speech competition was very rare topic this time to find out real facts from books and documents rather than internet. “Why Pakistan Resolution was presented in 1940?” & “Is Pakistan resolution is mainstream reason to get Pakistan?” Four Students have participated in this competition and audience were allow to come on stage and share their answers. Judges for the competition was Dr. Syeda Sadia HOD of Dept. of Islamic Studies,  Dr. Tariq Mehmood Assistant Professor Physics, Dr. Tahir Tayab Assistant Professor Urdu 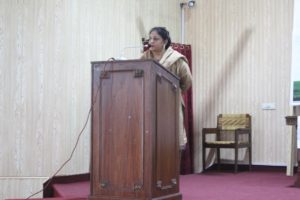 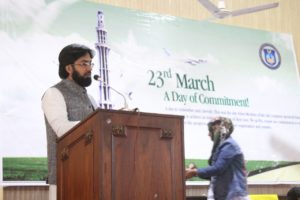 The first winner of the competition is Ayesha from Environmental Sciences and the Runner up is Rida Butt from Physics. After the speech competition Head of Department of Political Science clear the queries regarding this topic of speech and answer all un-answered questions. She cleared the miss-conception of students regarding struggle of Muslims and their achievement. She share with students that in 1940 Muslims really know their needs and presented Pakistan resolution. But Hindus took this perception as fools dreams and Muslim take their comments seriously and completed that dream in real shape in 1947.

Students of BS Political Science 4th Semester presented a patriotic skit on “how terrorism is placing in Pakistan?” and the way of Pakistani army and nation to combat with terrorism. And tell the society of Pakistan if we have to live with passion and unity we can fight with all evils in our country. 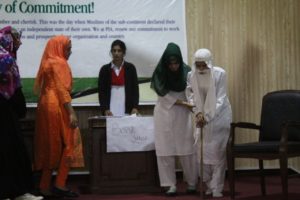 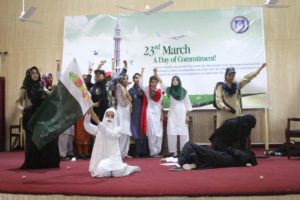 Later manager ORIC Mr. Sohaib Saleem share his zealous remarks with students, and ensure them to be patriotic towards country today instead of believing on rumors about anything. And ask student to be a real Muslim who is not afraid of death and war. He make sure students essence of being fanatical. He also tell students about fifth-generation War which will be on fault lines of Socio-Cultural ideological clashes. Youth will be mobilized to weaken the ideology of Pakistan. And ensure them to join NNC to learn the war tactics in today’s circumstances.
A performance by BS Political Science 2nd semester present melody performance on nationalistic mili nagma.
A student of Dept. of Mathematics Momna Dilawar has shared a beautiful Nagma with audience, as well as Student of Dept. of English Mozma shared a poetic poem with audience.
A quiz competition has been arranged between 8 teams at the end Dept. of Political science play a tough final round with Department of Chemistry and Dept. of Political Science won the quiz competition with huge appreciation by audience.

At the end of function the worthy Vice Chancellor DR. Khalil-ur-Rehman share the importance of Islam and the Pakistan. He told students that in 1947 it was not division of Hindu and Muslims but it was the battle of Right and Wrong, Muslims has won the war by the right virtues, Islam as the principles of Ideology which mushroomed and Pakistan came into being. 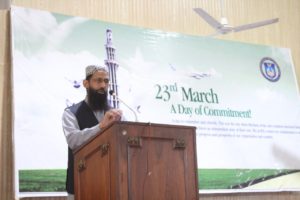 At the end of the program gifts and certificates given to the winners of Speech and Quiz Completion and a group photograph has captured. 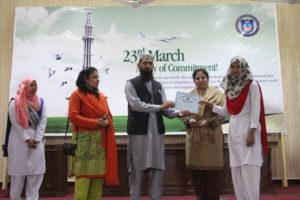 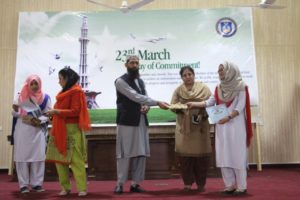 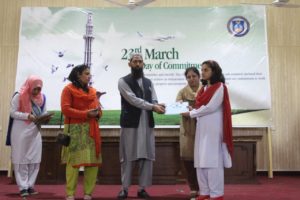