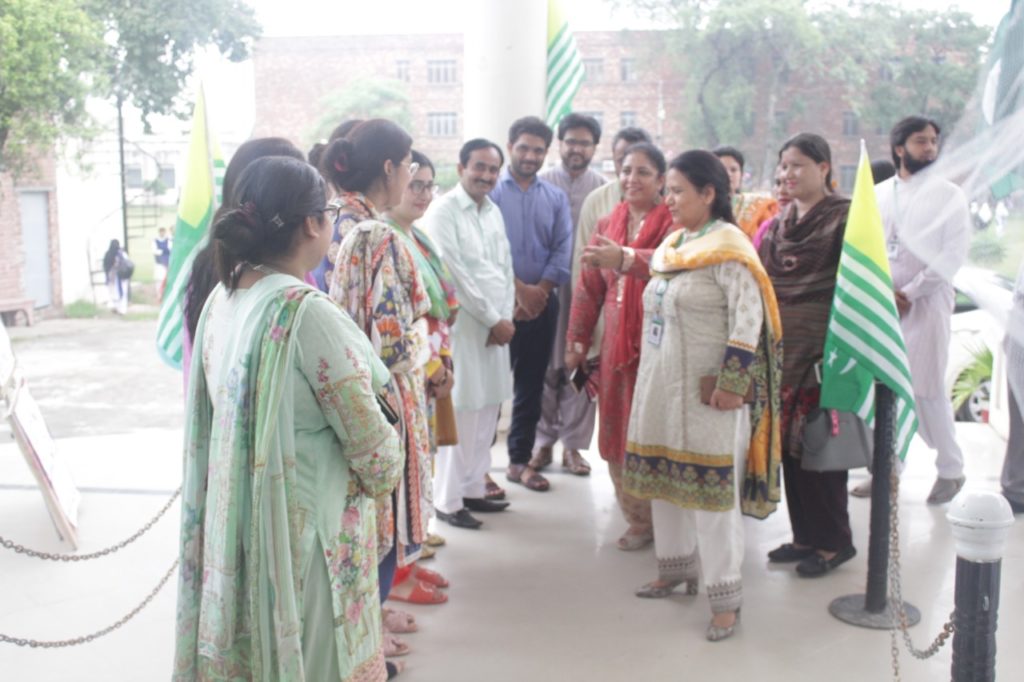 Host of the Program Ms. Aneeqa Komal and Ms. Fatima Rasheed from Department of Political Science shared the importance of defence day. She ensured audience that we have to see those families who are giving their sons, fathers to make Pakistani soil more strong and we need to show empathy with them. The defence day is not to sing national songs, to do debates we have to stand with those who have lost their loved ones, to ensure them that Pakistan never leave them alone. They are the main pillars for our society. 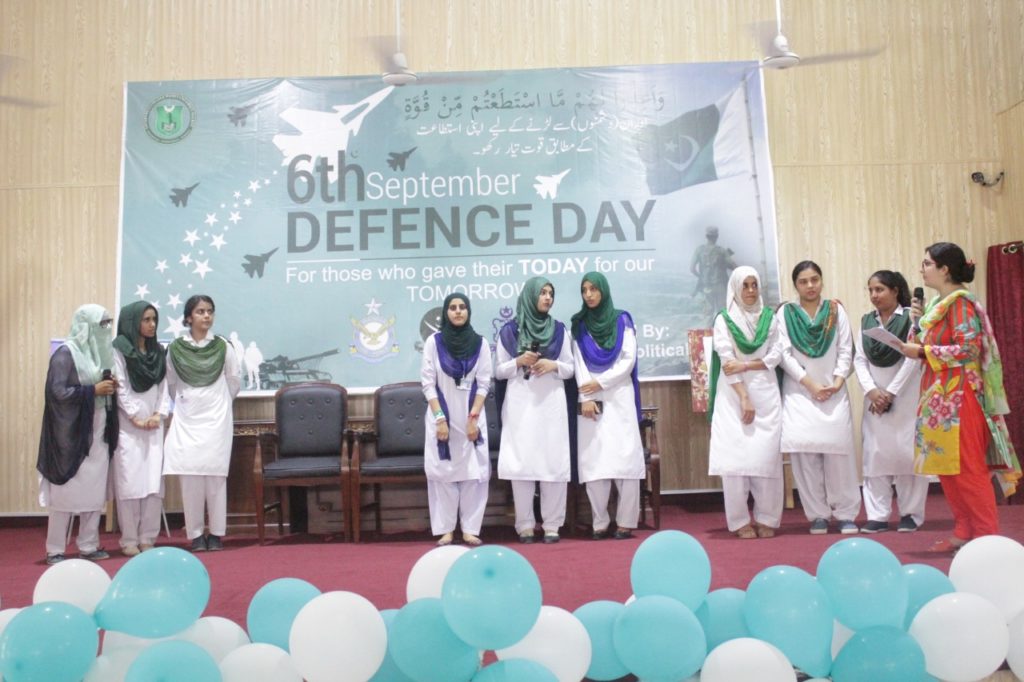 Two students have delivered speeches on the topic “Why the creation of Pakistan was necessary?” A Student from Department of Environmental Science Ayesha Ifthikhar shared her ideas very enthusiastically and relate to Kashmir by giving argument over independence, 2nd presenter Sidra-tul-Muntiha belongs to Department of Physics she in her speech cleared the word Pakistan in detail and she said we took the land of pure in 1947 if we did not get the land we will be slaves and there is no option in slavery, she relate it to Kashmir that at that time Mahraja of Kashmir annex with India and today world can see the condition of Kashmiris and this was the reason we get freedom/Pakistan. 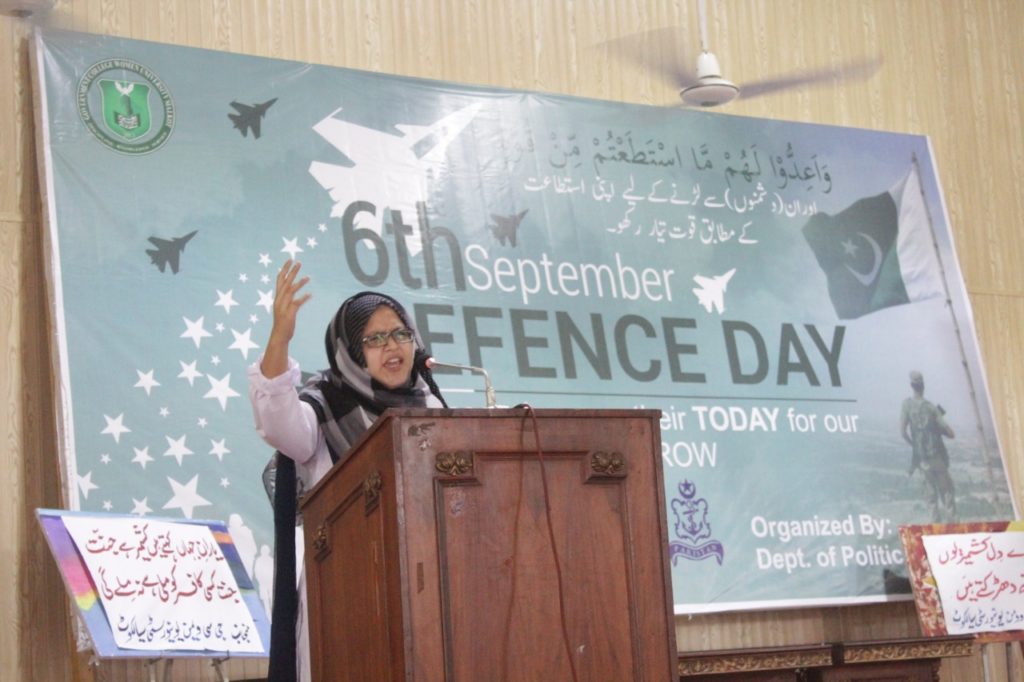 Students of BS International Relations presented a skit about Kashmir, in which they present the situation of Kashmir after ending article 370. They showed the stance of Modi, the role of Media, the role of international community and Sleepy attitude of Muslim Ummah. 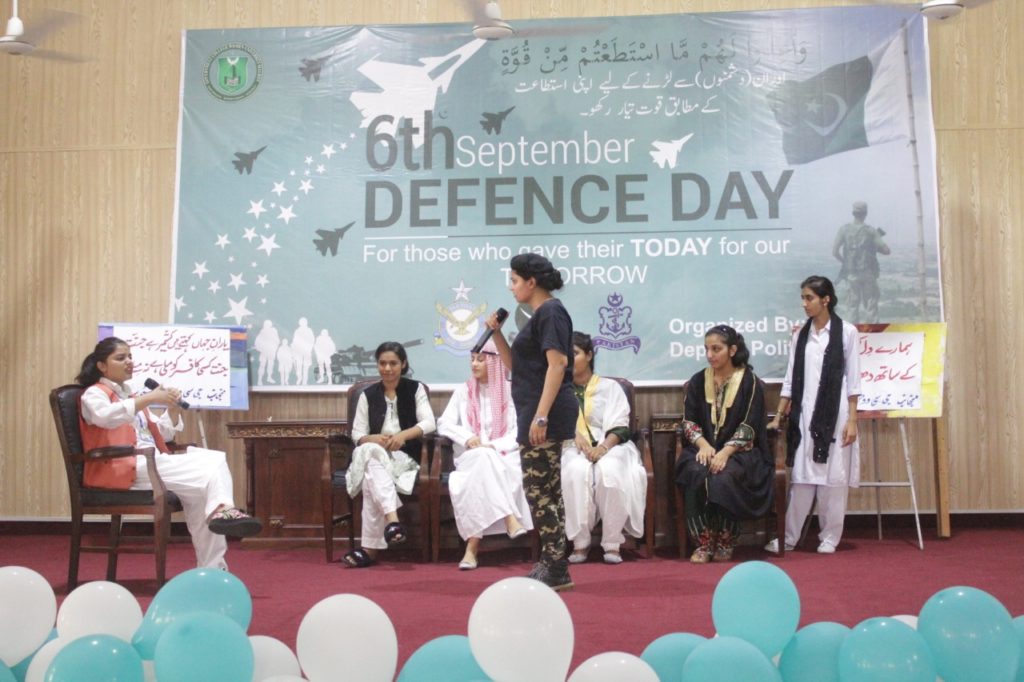 After the skit host welcome Vice Chancellor of GC Women University, Sialkot Professor Dr. Rukhsana Kausar to share her remarks with audience. She stated “We visited families of Martyrs yesterday in the relevance of Defence day. Where we observed another face of Pakistan, we met those mothers, those wives who are in pain, there is tears in their eyes, but the smile is on their faces. The blessing (Noor) of Allah was on their faces. They met us with heart, they shared their son’s, Husband’s or Brother’s stories of bravery with braveness. Indeed, they are alive.

But do not think of those that have been slain in God’s cause a dead. Nay, they are alive! With their Sustainer have they their sustenance, 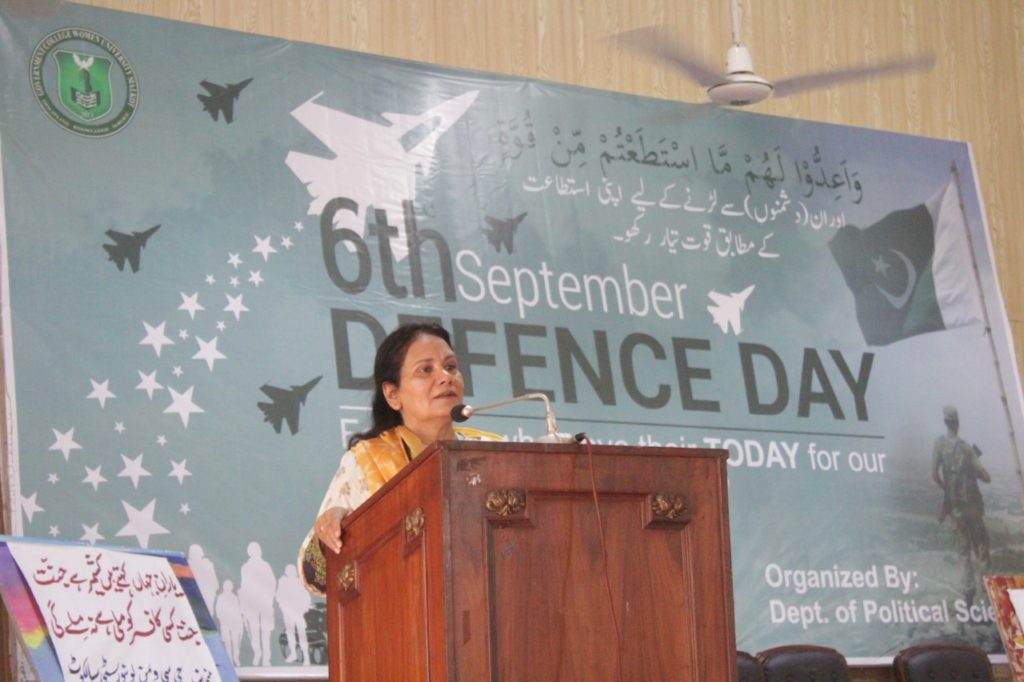 She also asked Department of Political Science to arrange a program for these families.

She also said that we have to fight for Kashmir and thankful to Allah for having Pakistan, we can depict what were our situation in United India whenever we see Kashmir, they are struggling from 72 years and India is showing its brutal face in Kashmir. We (the Pakistan) have to stand with Kashmir and to show solidarity with it. United nations need to highlight it as a conflict and humanitarian issue. India is clearly violating the charter of human rights in Kashmir. Muslim Ummah have to stand united with each other like one body. She said Sialkot already have contributed in this struggle, Iqbalians can show whole country that they are the one who is making things better. We are the shaheen of Iqbal, we have to remember it.  and she hoped the city of Iqbal will play its role once again. 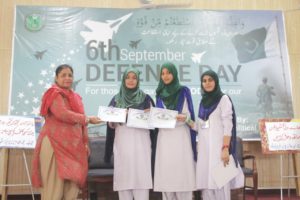 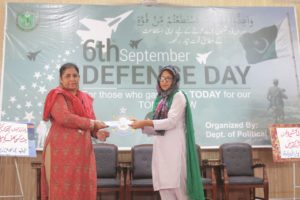 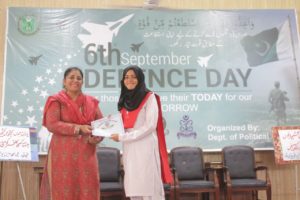 Later on Head of department shred her remarks she said the strengths never matter in war but the enthusiasm dis. Pakistani are the nation who stand together to compete with this kind of situation in past and coup it with bravery, she also said that Pakistan is trying its best to highlight Kashmir cause. United nations have to take it serious and stop the brutality in Kashmir, Kashmiris are confined in their houses, they know the worth of independence by struggling for it. Its right time to grant them independence and end of the time to show ignorance of International community. We always stand for Kashmir in past and we will be in future. 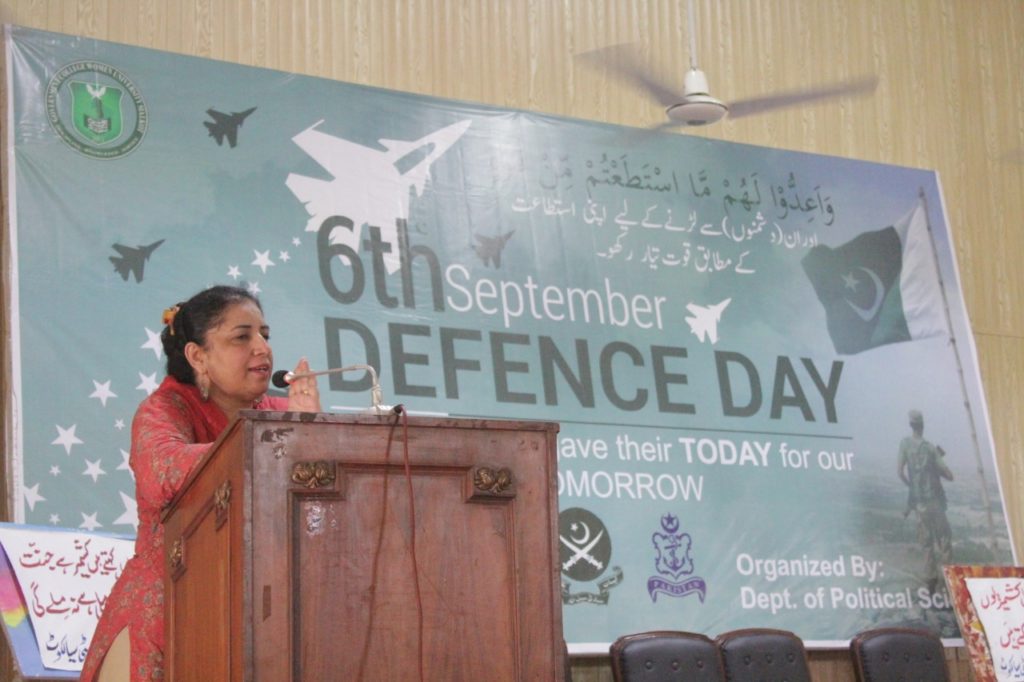 The Mili Nagma competition has started in which Ms. Mathaira from department of chemistry secured first position and Ms. Ayesha Bano from Department of political Science secure 2nd position.

Other rounds of Quiz played after the competition and Department of Chemistry 5th Semester win with the leading scores.

Program ended with the promise that Pakistan will never stay behind when it is about Kashmir, we will fight till our last breath and try our best to get free Kashmir from India. 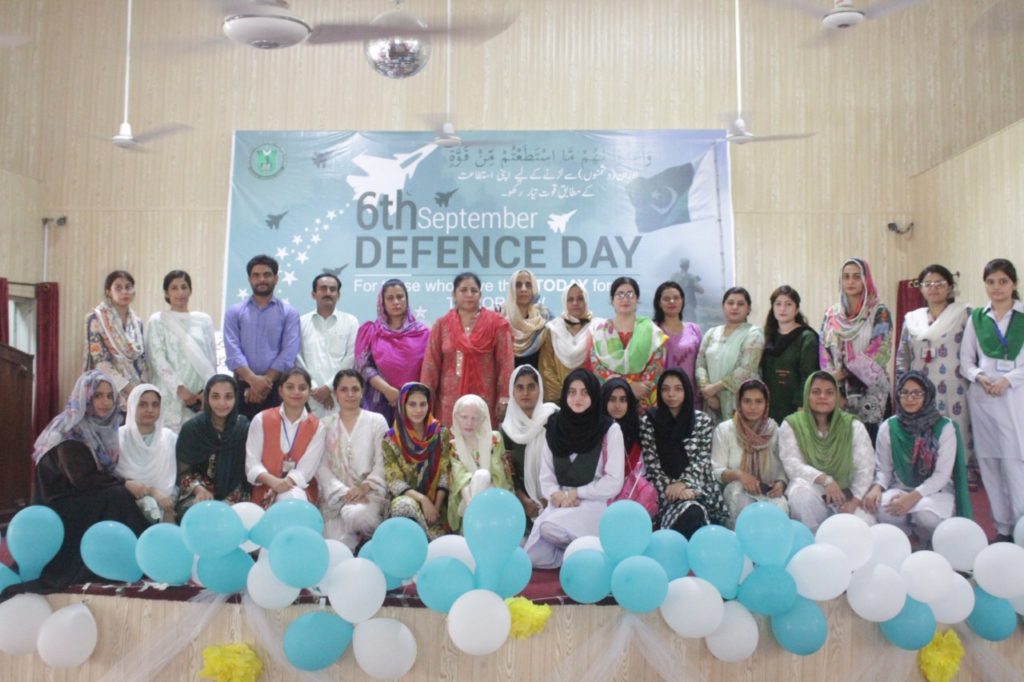 Kashmir solidarity walk has been arranged after the program welcome Vice Chancellor of GC Women University, Sialkot Professor Dr. Rukhsana Kausar, Director student’s affairs and other faculty participated it to show solidarity with Kashmir and cleared that we are always with Kashmir. Different Media channels covered this walk and also take remarks of Vice chancellor and students on the issue. 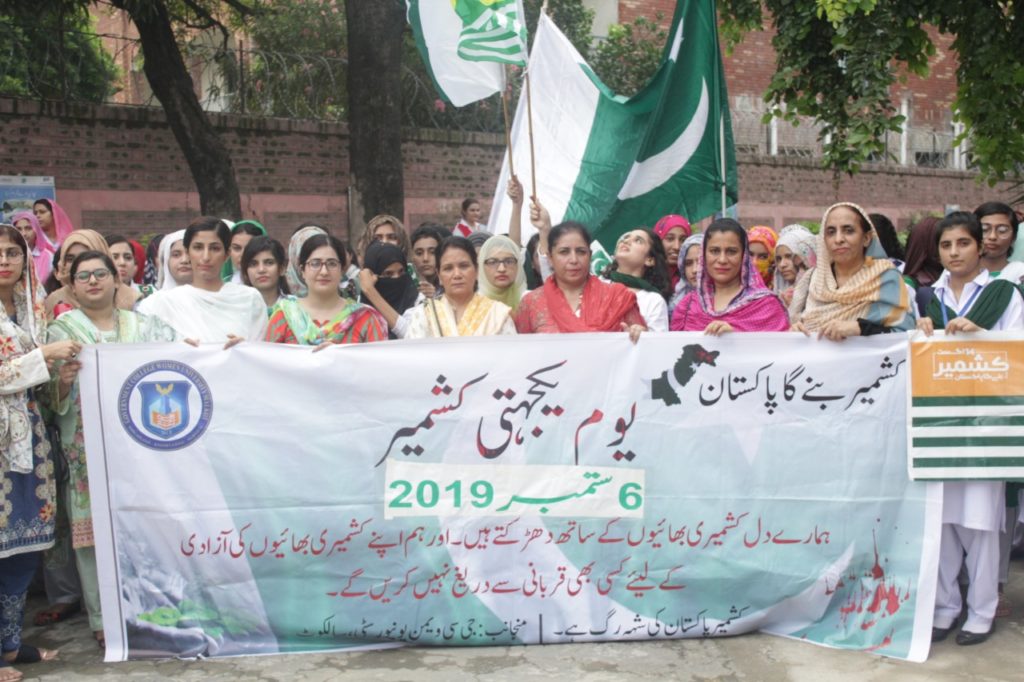